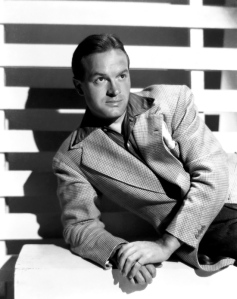 Bob Hope deciding to leave England at four years old because he didn’t think he would ever be King. I find that interesting that a little boy could make a decision like that so early on life. Talk about your boy genius’, perhaps he graduated high school when he was ten years old and even order his families plane tickets from lets say London to Cleveland or wherever the Hope Family decided to settle down in America. The problem that Bob has now, is that not only he would’ve never been King of England, but he’ll never be President of America, since he wasn’t born inside of the United States. And didn’t have at least one parent born inside of the United States either. So he was sort of out of luck as far ruling one country or the other.

I think it would be tough to be a comedian back in the thirties and forties, pre-TV for the most part and with the censorship era. Where entertainment and media executives were a lot more, lets say conservative, perhaps authoritarian, if that offends any Conservatives who might be reading this, but they were a lot more restrictive back then as far as what they would allow performers comedians or otherwise say and express on the air. Something the late great comedian Lenny Bruce found out the real hard way, the first comedian perhaps who used swearing in his routine. And he started doing that in the 1950s. The gee, that’s swell era of American culture.
Cavet Biter: Bob Hope Talks About Stage Shows, Radio & Censorship