Posted on December 8, 2014 by Erik Schneider

Similar to River of No Return, The Misfits is a very entertaining and good movie, but certainly not a great movie. The writing is pretty cheesy even for the 1950s and early 1960s and especially for a movie that is an action/western movie. But is has a good plot and a great cast. With two women that are essentially drifters, at least in Marilyn Monroe’s case who is just recently divorced and not knowing where she is going from there. And they meet two cowboys in a diner played by Clark Gable and Eli Wallach and find that they have things in common and decide to get together.

Marilyn Monroe’s character doesn’t have a place to stay and the Clark Gable character invites her to stay with him as a guest at her ranch and she more than keeps herself busy there and does a lot of work on the cabin really, a small cabin on a decent size lot of property. And Clarks’s partner in the movie played by Eli Wallach tells him that there are available horses up to be rounded up, brought back and sold, but they need another man to do the job. And they take the girls played by Marilyn and Thelma Ritter to a rodeo to find their man and that is where they get Montgomery Clift character to help them out.

Marilyn as usual is as sweet and adorable as can be and plays someone who wouldn’t step on nat if you gave her a thousand-dollar to do so. Clark Gable plays a veteran cowboy who is exactly that living the cowboy lifestyle and making his living rounding up horses and cattle. Eli Wallach plays a very similar character as Clark and Montgomery Clift plays a drifting cowboy along for the ride just looking for work. Thelma Ritter plays Marilyn’s friend and tries to warn her about cowboys and how they live. Marilyn being somewhat lost, just looking to find her way and to be useful. 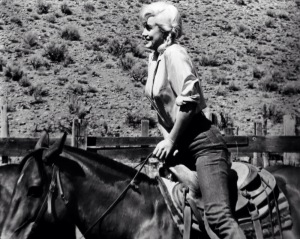