There have been several movies about John F. Kennedy. Because even though he only lived forty-six years there were so many things that went on in his life that were worth writing and filming about. Like his Navy career, what he did right after that trying to decide what he would do the rest of his life. His first campaign for the House of Representatives in 1946, his time in the House, he was a bit of a playboy there.

And not very disciplined, but of course he had the great name and was such a charming man and likable. His friendship with Richard Nixon in the House and later in the Senate. Sen. Kennedy’s name and charm was good enough for him to keep his job in the House and then even running for the Senate in 1952. His first Senate campaign of course being elected the same year that Dwight Eisenhower.

Jack Kennedy was elected to the Senate in 1952 and served in the last Republican Congress until 1995 with the Gingrich Revolution. Jack Kennedy’s time in the Senate, where he becomes more serious and takes the job seriously and puts in the time and work because of course he had bigger goals, Sen. Kennedy writes a book in the Senate Profiles in Courage where there was some controversy about whether Sen. Kennedy wrote the book or was the book written by Ted Sorenson one of his Senate staffers.

Adlai Stevenson the 1956 Democratic nominee considers Sen. Kennedy as his Vice Presidential nominee which would’ve been a disaster for Sen. Kennedy. Because GOV. Stevenson lost to President Eisenhower in a landslide and Kennedy wouldn’t of made much of a difference. I believe Hollywood for the most part has done a very good job with Jack Kennedy with making movies about him.

You could make another movie about Jack Kennedy’s Congressional career or the great presidential election of 1960 that featured Jack Kennedy and Dick Nixon between two future presidents. Or another movie about the Bay of Pigs Crisis in 1962 the failed attempt to oust Fidel Castro as President of Cuba. There are so many things that happened in Jack Kennedy’s life that are fascinating that are worth making public either by book, TV or movie that trying to cover the whole life in one movie or mini-series is too much, because you’re bound to miss something.

The Kennedy mini-series from 1983 with Martin Sheen is a pretty good, but not great mini-series. And it focus’s just on the Kennedy Presidency, starting on Election Night 1960 when of course Sen. Kennedy is elected President in one of the closest presidential elections of all-time beating of course a sitting Vice President who worked for a very popular President in Dwight Eisenhower beating Dick Nixon in 1960, a very long election night. Sen. Kennedy finds out that he’s just been elected President 6 or 7 the next morning. Jack Kennedy deserves several movies about him, all focusing on different aspects of his life. 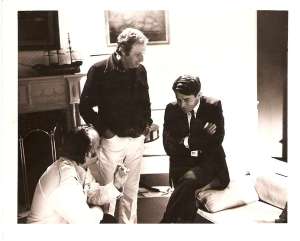