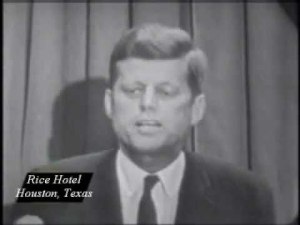 “Presidential candidate John F. Kennedys major address to a group of Protestant ministers on the religious issue. Many Protestants questioned the ability of a Roman Catholic President to make important national decisions independently of the influence of his church. Senator Kennedy answers those questions before an audience of Protestant clergy, many of whom may believe that he can not.
John F. Kennedy’s Separation of Church and State Speech.
Rice Hotel, Houston, Texas – September 12, 1960.”

Sen. John F. Kennedy was an Irish Catholic Northeastern Liberal Democrat. Running for President in 1960 and then being nominated by the Democratic Party as their presidential nominee, in a country that was overwhelmingly Protestant. That was fairly ignorant when it came to Catholicism and didn’t trust Catholics. And had a lot of miss givings about Catholicism and were worried that a Catholic President would try to establish some type of Catholic theocracy, that would govern the United States.

So because of the ignorance about Catholicism in America, Senator Kennedy had to answer some questions and lay out his beliefs when it came to Church and State how his religion affects his life in 1960. I wrote a blog about this a few weeks ago on FRS FreeState , after former Sen. Rick Santorum now a Republican presidential candidate, commented on Senator Kennedy’s speech about Church and State.

Where Senator Santorum said that the JFK Speech made him want to “throw up”. And said that Freedom of Religion and Separation of Church and State is exactly that, that we as Americans have the Freedom of Choice in whether to practice religion or not. But that we are a constitutional republic in the form of a liberal democracy. And we are governed by a Constitution, I believe the greatest Constitution in the World. As far as the amount of individual liberty it guarantees and protects. That we are not a theocracy and government can’t get involved in religion. Other than to protect it.

If it’s a Theocracy you want to live in, based on your own religious beliefs and be governed by that, and not a constitutional republic, then I suggest you consider moving to the Islamic Republic of Iran. or the Islamic Kingdom of Saudi Arabia. Because to be able to live in a country like that in the United States, would take a Constitutional Amendment in this country. Because we are a constitutional republic in the form of a liberal democracy. Not a theocracy, with Separation of Church and State.