Posted on September 2, 2014 by Erik Schneider

I can sum up the Republican presidential debates in several paragraphs or less, so I will. Mitt Romney- “vote for me because I can win” and his other slogan being, “if you’re for it so am I”. Newt Gingrich who I do take seriously as an intellectual until he says something that’s provocative. But then realizes its unpopular and tries to get away from it. As long as he doesn’t preach about moral values, “don’t do because I’ve done it and I know from personal experience.

That some of these activities in life, well take adultery to use as an example are simply personally wrong. Its wrong which is why you shouldn’t do it. (Even though I had a great time doing like having an affair with one of my staffers as Speaker of the House) When I was preaching about the moral decay of President Clinton”. Newt Gingrich won’t be up for Sainthood anytime soon, unless he pays to get in. And he is also unqualified to be a Monk, which may be why he’s stopped preaching about moral values.

You have a classical Libertarian in Ron Paul, who apparently walked into a Republican Party one day, thinking he was at a Libertarian Convention. And hasn’t found his way out of the Republican Party and is probably also unaware that he’s at a party that’s dominated by the Christian Right and Neoconservatives. And the Tea Party that at least part of them are in bed with the Religious Right and Neoconservatives. And are so warm there, that they can’t get out of bed. Then there’s John Huntsman and Gary Johnson who have no shot at the Republican nomination because they would both make excellent Liberal Democrats and they are both sane and that just aint going to cut it in today’s GOP.

I would mention Rick Santorum and Michelle Bachmann, but like I said I could sum up the Republican presidential debates in a few paragraphs or less. And since I’m not a politician or running for public office, I can stick with positions I’ve already made. Other to say that they are both American citizens, born in America and 35 or older. (At least as far as I know) And besides I have nothing to say nice about either of them. Other than maybe Senator Santorum who I’ll admit he’s one of the most honest politicians I know of. And that is a complement in todays politics, it’s just that he knows so much that isn’t true and actually believes in it.

Which would make Rick scary as a President and Michelle Bachmann just proves that even mental patients, even escaped mental patients are apparently qualified to run for President of the United States, or at least until they are recaptured. Rick Perry well when he decides what he believes and what his plans are for the country, I’ll take a look at his presidential campaign. The man keeps teleprompter’s in business by himself and with Herman Cain. Well his presidential campaign got suspended so now I would just be piling on. So what the hell, the man is not even qualified to pass a course on sexual harassment awareness. I’m not sure what the exact name for the course, I’ve never had to take it myself, let alone be President of the United States.

Thats the Republican presidential field of 2011-12, I know I’m thinking the same thing, “is that it”. Where’s Dwight Eisenhower, Barry Goldwater, Dick Nixon, Gerry Ford, Ron Reagan Bob Dole. The problem is those people don’t exist in the Republican Party anymore and wouldn’t get the nomination for President in today’s GOP. Because they wouldn’t be trusted by Religious or Neo Right which is the problem for Mitt Romney. Who twenty years ago would’ve fit in perfectly in the GOP but because of the new GOP he has to say things just to please to them and say different things to different audiences. 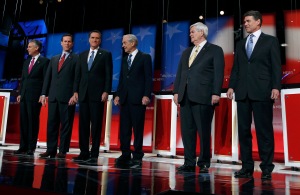