Washington Post: Opinion: George Will- Progressives Are Wrong About the Essence of the Constitution: The Differences Between Social Democracy and the Federal Constitutional Republic 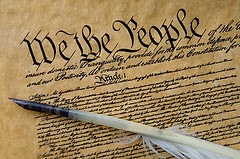 Source: This piece was originally posted at The New DemocratThe more I hear from today’s, so-called, Progressives, the more I believe that they are from a different country or, at least, have lived a long time in another country. They don’t seem to see the U.S. Constitution for what it is.  They say, “Look, this is how other countries do it and it works there so we should do the same thing here.”  They seem to be ignorant of the Constitution’s constraints on the Federal Government.These people are really Social Democrats.  They believe that the United States should be ruled by majority rule.  If we ever let the will of the majority decide everything without that annoying document that keeps interposing the Federal court system,  we could build the socialist utopia that they’ve always wanted and take care of everyone.The Social Democrats, in the absence of the Constitution, would move to a parliamentary social democracy where Congress, actually just the House of Representatives, would pick our President for us.The Constitution protects our individuals rights, our ability to live our private lives with minimal interference from government.  Today’s Neo-Right Republican Party doesn’t like that.  They claim to favor democracy but support the banning of homosexuality and same-sex-marriage.  They complain that the courts are thwarting the will of the people and being undemocratic when one of their big government behavioral control proposals is rejected.  They are either ignorant of the Constitution or hypocrites.As George Will said in his column today, the U.S. Constitution is not about protecting American democracy but  protecting the constitutional rights of individual Americans.  Government at all levels is prohibited from infringing these rights even if certain of them become unpopular and a popular will emerges to limit these.  The U.S. Constitution protects Americans from big government even if an overweening big government becomes popular.