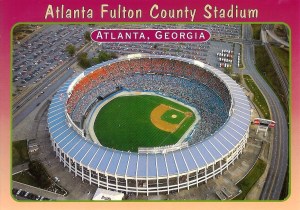 This post was originally posted at FRS Daily Press Plus

An interesting matchup for a championship series with two teams that were almost nothing like. The St. Louis Cardinals as a team hit less than 100 home runs that season. George Hendrick who was a solid power hitter for a lot of his career, led the Cardinals with eighteen home runs. This was a team that would get on base by walking and slapping singles and the occasional double. And then stealing a lot of bases and stretching singles to doubles, doubles triples, scoring from first base. Playing great defense and getting great pitching. This was known as Whiteyball named after the great Cardinals manager Whitey Herzog. The Atlanta Braves in 1982 were a power hitting team led by Dale Murphy and Bob Horner with Chris Chambliss as well. So this was a matchup between a speed team in the Cardinals both on offense and defense. Vs a power hitting team that pitched and defended well enough to win the AL West in 1982.