Governor Chris Christie should just layoff of this same-sex-marriage case for a couple of reasons. One of them political and the other practical. The political one being that he’s the only Republican that may be able to win New Jersey and other states in the Northeast. And big states in the Midwest if he were to run for President in 2016. But he takes a hard stand against same-sex-marriage that would hurt him in his home state and the Northeast. Even if it helps him with the Christian-Right. The other being a practical one that he would probably lose an appeal in the New Jersey Supreme Court that probably has either a lot of Democratic appointees, or Republicans who are open to same-sex-marriage. There’s nothing for him to gain in pushing opposition to same-sex-marriage except for maybe fundamentalist Christians in the Bible Belt. That probably do not like him anyway because he’s Catholic and from New Jersey and perhaps even that he’s Italian. So he should just drop it. 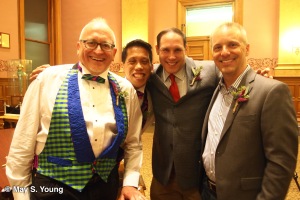