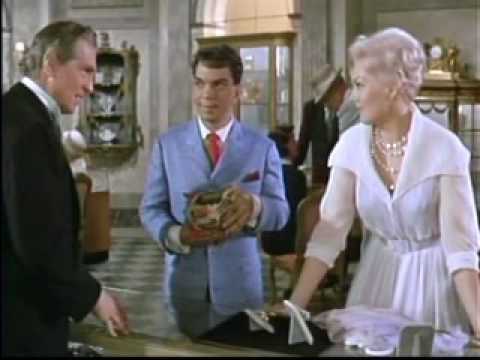 Pepe meeting a Goddess. Not just any Goddess, but Goddess Kim Novak. Which would be like meeting Queen Noor from Jordan, or some gorgeous adorable Goddess like that, a woman who when you see her at least for the first time, your brain goes blank, because your eyes and what you’re thinking about what you’re seeing, simply overwhelms the rest of your brainwaves.

Kim Novak, the Goddess who cut her own career short because she’s a somewhat shy, perhaps even aloof woman, who never saw herself as good as the people she worked for, worked with and who wrote about her. And thought she would be happier doing other things.

And here Kim is in this scene (I imagine playing someone else) who sees a very charming, cute, little Latin fellow, whose new to America and wants to buy his girlfriend a very expensive gift that he can’t afford. He’s in luck, because he not only meets a blonde Goddess, but a very sweet and not just physically, Goddess who is also very generous and just happens to run the jewelry store that Pepe is at. And decides that he’s worth her generosity and gives him a fat discount on the ring for his girlfriend.

Pepe gets the gift of a lifetime (in multiple ways) for this man and many other men. Which goes to show you that some Goddess’s actually are sweet as they look, Kim Novak, a hot, baby-faced, Goddess, who personally is as sweet as she looks.