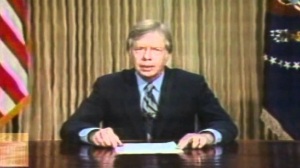 What a crazy time for America and Iran. The Iranian people were fed up with their dictatorial authoritarian government that they had in Iran under the Shah that both the United Kingdom and United States backed for almost forty years and even installed in Iran. So what you had was a bunch of Islamic theocratic revolutionaries under Ruhollah Khomeini decided to stand up and the Shah knew he no longer had the authority to lead his country and decided to leave his country. Which left a power shortage in Iran with a new Islamic theocratic government under Supreme Leader Khomeini coming into place.

And because America had backed the Shah for so long and President Jimmy Carter saying that the Shah was such a fine leader and good man for Iran, these Iranian revolutionaries decided to take out their frustration and anger on what was left of American involvement in Iran which was our embassy there. And took about hundred American U.S. embassy employees hostage. Which is how the Iranian hostage crisis started. Which was essentially the end of Jimmy Carter as a strong leader in America, or even having the potential of being a strong leader of the United States. Because now America looked weak compared to a third-world country and was held hostage.