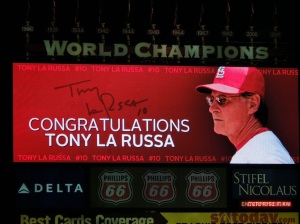 The only thing keeping Tony La Russa out of the Hall of Fame as a manager was himself, because he’s been managing for 33 years consecutively, his whole career, and I believe he’s been the best manager in Major League Baseball that whole period, and that includes people like Tommy Lasorda, Billy Martin, Earl Weaver briefly, Bobby Cox. Joe Torre, Roger Craig, Jim Leyland, and many others.   Some may say Joe Torre because of the championships:  4 World Series Championships, 6 American League Championships, 11 Eastern Division Championships, and 13 playoff appearances.  Only Tony La Russa and Bobby Cox come close to those accomplishments in this time period.

But when Joe Torre was with the New York Yankees from 1996 to 2007, you could make a case that he had the best team in MLB every year he was there, especially from 1998 to 2007, but they came up short several times, as in 2001 losing to the underdog Phoenix Diamondbacks, 2003 losing to the underdog Miami Marlins, both in the World Series, 2002 losing to the underdog Anaheim Angels in the American League Championship, and 2004 blowing a 3-0 Series lead to the Boston Red Sox in the American League Championship, something that will always be hated by Yankee Fans and loved by Red Sox Fans.  I know a few of those fans myself. And of course the Yankees always had the most money in this time period and could always basically put all-star teams together to win the World Series.

Other than the time period during which Tony La Russa was with the Oakland Athletics from 1988 to 1990 or 1991, he was there from 1986 to 1995, but in those 4 years you could make a pretty good case that the Athletics should have won at least three World Series if not four, because from 1988 to 1990 they had the best three teams in baseball.  And they only won one World Series.  Of course, one is better than nothing but in the two World Series that the Athletics lost in 1988 and 1990, they won a total of one game.

They lost 4-1 in the 1988 World Series to, I believe, the worst World Series Champion since 1969, the Los Angeles Dodgers, who only won something like 85 games that season.  And of course you had the famous Kirk Gibson home run in game one to win that game against the best closer in baseball at the time, Dennis Eckersly.  When Tony La Russa was in St. Louis with the Cardinals from 1996 to 2011, he didn’t always have the best team and he still won 7-8 Central Division Championships, three National League Championships, and two World Series, and made the playoffs 9-10 times again. When only four teams make the playoffs in each league, they may go up to 5-6 teams in 2012, but we’ll see.

Tony La Russa was the best manager in MLB in his era as well as today because of what he got out of his players for the most part, not including his time in Oakland, but definitely in St. Louis, a midsize market. But with a great fan base, if not the best in MLB, it was just a matter of when Tony La Russa would retire.  That would determine when he was going into the Hall of Fame, because he’s a first ballot Hall of Famer in waiting.
CBS News: Tony LaRussa Retires as Cardinals Manager