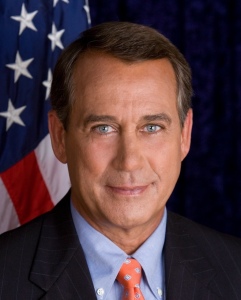 Speaker of The U.S. House of Representatives

Source: This piece was originally posted at FRS FreeState

I hate to say this but it’s looking more and more likely that current House Minority Leader, John Boehner (not boner or bonehead, as many think) will become the next Speaker of the House going into the 112th Congress.  According to independent polls from Gallup, Politico, the Hill, etc., as many as 90 Democratic House seats are in play for Republicans.  Republicans have to pick up only a net of 39 seats to win control of the House, i.e., 39 out of the 90, while holding their own. That’s only 43% of the seats in play to win control of the House.  I think that’s too tall an order for Democrats fill to retain control if the House.

For House Democrats, the only drama  on Wednesday morning will be the election of the next Minority Leader.  They were in this position for twelve straight and painful years from 1995-07, an experience they haven’t forgotten.

Assuming the polls are correct and Republicans do win control of the House Tuesday night, I think that current House Speaker, Nancy Pelosi, will step down as the Democratic Leader and, perhaps, even leave the House all together.  She probably won’t have the votes to be reelected Minority Leader, a position she held from 2003-07, very skillfully.  But times have changed.  House Democrats, especially Blue Dogs, assuming there any left after Election Night, (not a safe assumption) could argue that she led House Democrats to  defeat with all of the unpopular legislation that she talked them into passing, like the cap and trade bill that will never become law in its current form, deficit spending, and the Affordable Health Care Act (AHCA).

Blue Dog Democrats are fiscally conservative and generally don’t support these things.  Not one single Blue Dog who voted for AHCA is mentioning that vote as they run for reelection.  They could argue that these unpopular votes, pushed by Speaker Pelosi and Leader Steny Hoyer, led House Democrats, especially Blue Dogs, to defeat.  The House Democratic leadership should have been smart enough to see this ahead of time.

This leads me to the status of House Leader Hoyer, who has a lot of support amongst all of the factions in the Democratic Party, progressives, liberals and Blue Dogs alike.  You could make a case that Leader Hoyer, whom I’m proud to have as a fellow Marylander, had a role in leading House Democrats to their defeat.  I don’t think House Democrats have a clear leader going into the 112th Congress if they lose Tuesday night.  I think they’ll have a leadership fight after Tuesday night.

I hope that the polls are wrong, as they were in 1948 when they predicted that President Truman would lose reelection but they probably are not.  Polling technology is much better and more accurate now than it was then.  House Democrats will have some regrouping and self-examination to do, which isn’t always bad for a great political party, of which I’m proud to be a member.
CBS News: Evening News- Cynthia Bowers: John Boehner, Next Speaker of The House?
38.969214 -77.129413