Erik Schneider on Facebook: Lyle Denniston: Where Do Abortion Rights Go From Here? 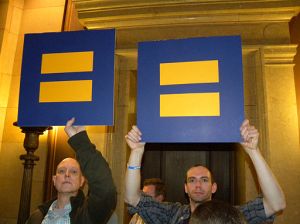 Source: This piece was originally posted at Erik Schneider on Facebook: Lyle Denniston: Where Do Abortion Rights Go From Here?

I thought on this beautiful warm morning in the nation’s capital (the capital of the free world) that I would blog about something as unifying as abortion. Where there’s such an absolute consensus, arguing against it is like arguing in favor of slavery or something. Ha, ha! But to be serious I’ve always find it ironic that a state like Texas which claims to be so pro-life, consistently leads the nation in state killings. And the most uninsured and with high crime rates and not just in Houston and San Antonio and everything else. I mean I understand the mainstream pro-life position on abortion. It’s the other stuff that puzzles me. I would think anyway that a state that claims to be pro-life wouldn’t lead the nation in death penalties. But maybe that’s just too much common sense for the average American, or something.

As far as the Texas abortion case. If you try to shut down health clinics, because they perform abortion, you’re violating Roe V Wade. Because you’re essentially saying that women can’t get an abortion in your state. And you might say they could go to their local hospital, but a lot of Americans especially in Texas perhaps, live far away from hospitals and rely on local clinics for their health care. The neighborhood doctor, if you will. Or say women can’t get an abortion after a certain period of time. You’re still violating Roe V Wade. You’re putting the state’s view over the individual and saying the state knows best what health care people should have and when they should get it. States that claim to be anti-big government, shouldn’t be promoting it. And telling their people what they can do with their bodies.

To sound a bit more positive, if I was even offering free advice and no I’m not a charity, but if I had free advice for the anti-abortion movement, (I hate the term pro-life when it comes to abortion) I would suggest they become more consistent and positive on this issue. And then if they offered to pay me for my advice I would layout several steps for them to take. But if you want to hear it anyway. I would say people who claim to be pro-life, should be against the death penalty. Be against abortion with exceptions for life and health of the mother, if you believe fetus’s are babies and therefore alive and deserving of the same Right to Life as people. You say that the state should never promote killings, except and only as a last resort to defend the public. Lethal force to defend the public as a last resort, but if you have the murderer in prison for life, you’ve already removed that threat to the public.

My positive message for the anti-abortion movement would be yes you’re anti-abortion, but you’re also pro-life. So you’re promoting adoption and quality parenting for all. Quality education for all. And anti-poverty agenda that promotes economic freedom for low-income parents and school choice for their kids. You’re acknowledging the obvious (without stating it) that you don’t have the political power to outlaw abortion, so you offer an alternative instead. And get the message out that their options for women to take when they have unwanted pregnancies. Like adoption and for low-income women to self-improve and get the skills they need to be successful in life. Instead of passing laws that might look great in your state, but then get thrown out later on simply because they’re unconstitutional.

As far as abortion rights and reproductive rights in the future. We now no longer have 5-4 pro-choice position on abortion on the Supreme Court, but a 5-3. And most likely thanks to the Democratic Christmas gift known as Donald Trump, the next U.S. Justice will also be a Liberal. So whether the anti-abortion movement like it or not and you can pretty much put the nail in the coffin that they will hate this reality, they’ll probably be stuck with abortion for at least another generation. So again if I’m offering advice (free or otherwise) to the anti-abortion movement, I’m saying you need a positive alternative here that can actually become law. Trying to almost completely outlaw abortion if not completely do it (if you’re Governor Scott Walker) is not in the cards right now. So get involved in liberal democratic marketplace of ideas and tell American women they have other options here.