Posted on September 4, 2014 by Erik Schneider

If you want to know what demagoguery, paranoia, exaggeration is, or what being obsess is, then just watch the Glen Beck Show or whatever he calls it now. Just don’t ask me to help you spell those things. Because there you have it unless you’re severely learning disabled, blind and death you’ll get an excellent idea of what all of those things are. Glen Beck has a habit of taking minor things and making them look like tragedy’s or crisis’, the exact type of person who shouldn’t be President of the United States.

Glen Beck shouldn’t be an executive in any other type of government because he lacks an even keel, the ability to see things as they are and not freak out about them. Like with the health care reform debate in 2009-10, where Glen Beck accused President Obama of hating Caucasian people because he wanted to tax tanning salons which I’m guessing is something that Mr. Beck doesn’t use very often. Or may not even know where one is.

Which is like saying people who believe the Palestinians deserve their own state must mean that they hate the Jewish people which is nonsense .You need more to go on then just that. I’ve never taken Beck seriously and have chosen not to. I prefer to see him as a libertarian comedian which he is rather than some intelligent political analyst. I just prefer to do that before I label someone ignorant as a sack of bricks. Or has an IQ below freezing, makes both George W. Bush and Sarah Palin look like genius’. You can add Sarah Palin to that list with Rick Perry towards the top as far as new applicants.

I don’t listen to Glen Beck very often except for on YouTube, I’ve made that decision. Because even though I find him to be funny, my level of tolerance for nonsense is very low. I have that same policy for a lot of the Republican Party right now except for their leadership and presidential candidates. Because as a blogger I feel the need to keep up to date with them. I’ve made the decision not to listen to a lot of these people, because the amount of what they don’t know is enough to fill up the Rose Bowl in Pasadena a Stadium with 100K Seats. For all you non-sports fans like my mother.

Or as Ronald Reagan said, but about the Democrats, “they know so much that is not true”. I do listen to what Beck has to say about progressivism and socialism, because he’s funny when he goes off on them. And his facts tend to be pretty good, it’s just when he relates the entire Democratic Party with these politics he loses me like Chris Rock cracking a redneck joke at a KKK rally. Because again it gets back to his demagoguery and hyperbolic rants. When he speaks about things like that, he tends to be as off the mark as an auto mechanic giving a lecture on brain surgery. He tends to speak out of his ass which makes him funny because of how ignorant he is.

A lot of times when I hear Glen Beck speak, I think about George Carlin when he says that we can’t blame our politicians. Because they are us, they come from the same places that we do. Schools churches, neighborhoods etc. He’s as ignorant as a lot of people that send our politicians back to office. Or I think damn our education system really has fallen to have people like Glen Beck speaking about key issues and attracting followers. 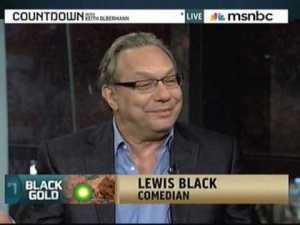 Full-time blogger on a multiple ray of topics and subjects, because of multiple interests.
View all posts by Erik Schneider →
This entry was posted in Political Satire and tagged Glen Beck, In God We Rust, Lewis Black, MSNBC, Rachel Maddow, Republican Party, The Rachel Maddow Show. Bookmark the permalink.