What the U.S. Supreme Court ruling on campaign finance did last week was, essentially, to make bribery legal so that members of Congress will no longer have to feel guilty about taking money for voting for this or voting for that.  Or in the case of the U.S. Senate, voting to not vote,  if you are familiar with the Senate cloture rule.  If you are familiar with the Senate cloture rule, you are probably qualified to teach Greek or ancient Mongolian history because the cloture rule is just as complicated.Free speech? Give me a break, we are now talking about paid speech. The people with the most money have the most influence, which has always been the case in Congress.  The only thing these Supreme Court decisions have done is to make that legal. Congressional influence will be sold to the highest bidder.  Policy luncheons and committee hearings will be replaced by fundraisers and get togethers in private clubs and junkets where only the members of Congress who are the best boys and girls at delivering what special interests want are invited.I wonder if I can get out of paying taxes at all if I just stuff a thousand dollars down my representative’s or senator’s throat.  Or, say that I owe this much in taxes.  How about I just give it to you, Senator Smith or Representative Jones, and write it off of my taxes. I get out of paying income taxes and you get the money you need to get reelected and we can do the same thing again in a couple of years. This might sound like an exaggeration but Americans politics is now at the point where public service, whatever the hell that is anymore, is now private service to the highest bidder.We now have a Representative from Virginia, Jim Moran, a Democrat for whom I have a lot of respect  and like politically. No joke, I really do, (with only one finger behind my back).  He has the balls to say that members of Congress are underpaid.  No, seriously, he actually said that.  This guy only works half the year, lives full-time in Alexandria and gets to go home every night.  Only a handful of members of Congress get to do that.  Congressman Moran makes $174K per year as a part-time worker.$174K a year is the average salary for an associate lawyer. What does he do with the rest of his time and spend all of his money on?  Wait, I’ve got it, he needs more money to pay for more fundraisers or, perhaps, to hire people to stuff money down his throat so he can keep getting reelected. Yeah, thats it. Guess what, that is not what the people who live in his district, who can’t afford to make big political contributions, are paying him to do. 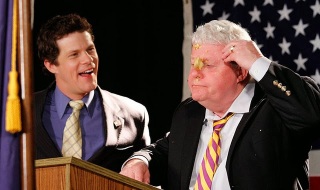