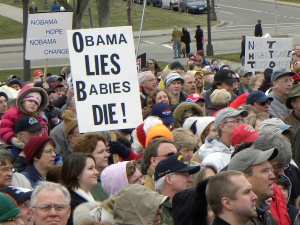 When the Tea Party was first put together or when these Tea Party groups started being formed. In 2009-10 during the start of the Great Recession but also when the debate was going on about healthcare reform. I had I guess a mild respect for them even as a Liberal-Democrat. Because I saw this movement as perhaps as something that could revitalize the Republican Party. And move them past Bush-Cheney and get them back to their real Goldwater/Reagan Conservative roots. That part of the movement is still there to a certain extent in its Libertarian faction. Which is real and there with people like Rand Paul, Mike Lee and even Ted Cruz. As well as Justin Amash the first three men are U.S. Senators and Justin Amash is a U.S. Representative. But the Tea Party emerged to take on Democrats, defeat healthcare reform, address the national debt. Cut federal spending and had a real political agenda but they really weren’t put together to govern. This was a movement that was put together to change Washington especially Congress. Saying old Washington politics is bankrupt and the old go to get along and meet me half way. Is what is wrong with Washington and we need people there who will stand for their principles no. Matter what even if that means shutting the government down that they do not like. And risk defaulting on the national debt.

I use to believe that the Tea Party might be the emerging of the Conservative-Libertarian faction. Of the Republican Party and to a certain extent they are but as we saw in the first six months. Of the 112th Congress after Republicans just took over the House of Representatives. This was the Republican Party of the mid and late 1990s of social issues and restricting women’s. Ability to get healthcare along with trying to repeal the Affordable Care Act something they never. Had any shot of with a Democratic president and a Democratic Senate something most people. At least in Washington knew was doomed to failure as early as January of 2011. But again standing on principle at all costs and they kept pushing forward. Deficit and debt reduction even related to the debt ceiling but only our way or the no way. With no new revenue in the deal and as a result you get a country that almost defaults in the Summer of 2011. That produced instead of budget cuts, tax reform including new revenue. We get across the board budget cuts even in areas where we shouldn’t be cutting.

You move ahead to the 2012 elections including presidential where the Tea Party doesn’t produce. A presidential candidate except for maybe Rick Perry who couldn’t get both of his feet out of his mouth. Whose presidential campaign was basically over by December 2011. And other Republicans who do not come from the Conservative-Libertarian faction of the party. But came from the religious-right faction of the party like Michelle Bachmann and Rick Santorum. Who made constitutional amendments to outlaw same-sex-marriage and pornography. Big parts of their presidential campaigns, Rick Santorum even flirted with the idea of a proposal to. Outlaw gambling in the country so this was not the Conservative-Libertarian faction of the. GOP taking over and leading the way for president and then you go to the Senate elections. Where Senate Republicans had a good shot at winning back the Senate in 2012. And instead drop two seats because they nominated Far-Right religious-right Senate candidates in places. Like Missouri and Indiana states where they should’ve won going in.

Today thanks to the debt ceiling and government shutdown standoff over a piece of legislation. That is already the law of the land the Affordable Care Act. Where the establishment wing of the party wanted nothing to do with the defunding debate especially. Tying it to things that Congress simply has to do like fund the government and extend the debt ceiling. We have a Republican Party that is a Republican Party in name only. It is basically a party that is made up of Republicans and Confederates and even Theocrats. That is why this post is partly called the Tea Party Secedes From The Republican Party. That is what has happened with the Republicans wanting to govern and play the best hands that they. Have in this divided government with the Confederates wanting to fight for their principles. At all costs even costing the Republican Party what is left of their fragile power.

Because the GOP is now a party in name only when they are two or three political parties. They’ve paid a heavy price for this shutdown debate they’ve already lost and it gets worst for them. With the new deal in the Senate that will have the votes in the House. With Speaker Boehner not blocking the bill. And you’ll have the Tea Party launching this whole war and getting nothing out of it. With the Affordable Care Act still up intact fully funded with people being able to help from it. And giving Democrats a huge issue to use against Republicans in the 2014 midterm elections.