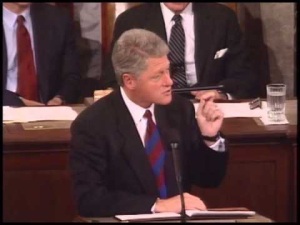 42nd President of The United States

I give President Clinton an A for effort when it came to health care reform. Because it was something he really wanted to do and believed in and understood the problems and had the ideas at least worked out in his head in how to deal with the problems with the American health care system. Not enough people having affordable healthcare because health insurance simply wasn’t affordable to enough Americans.

And too many Americans being forced to pay for others health care, because all Americans get health care whether they can afford it or not. But the people who have the health insurance get stuck paying for the health care of the people who do not have health insurance. Which is a problem that we still have. But I give President Clinton an F for execution. Because for one, he failed to even get a vote on his plan in either chamber of Congress, despite having large Democratic majorities in both the House and Senate.

Because his plan was too much, too fast and too complicated. When what he really should’ve done was to bring in Congress early both Democrats and Republicans and see what he could get through Congress. And what he could accept.