The Iranian Hostage Crisis, was the final nail in the Carter Presidency. Not so much the day that it happened, but how long it went on. Plus the fact that it was one more big blow that President Carter and the Democratic Party couldn’t afford controlling both the White House and Congress going into the 1980 general elections. Going up against a Republican Party, that was on the rebound and anxious to get back into power. If you look at President Carter’s poll numbers from the summer of 1979, one of the worst summers that America has ever gone through, at least economically with the energy shortages and everything else, President Carter was in the low thirties.

Plus, the economy was going back into recession and was dealing with high interest rates and inflation. And then the hostage crisis starts in November, right before Thanksgiving that year. But the country sort of came together around the situation, because we wanted our people back. Especially the families and President Carter acted so strongly and swiftly in response to the crisis. And his poll numbers shot back up as a result. Progressive Democratic Senator Ted Kennedy, challenges the President for the presidency in the winter of 1980. But Carter whips Senator Kennedy is most of the Democratic primaries. It wasn’t so much the Iranian Hostage Crisis that ruined the Carter Presidency, but how long that it went on.

That a third world country of twenty-five million people, could hold the world’s number one military and economic power hostage for an entire year. If the crisis was over by the spring of the 1980, President Carter probably does much better against Ronald Reagan and the fall and perhaps even beats him. Because the economy started rebounding as well. The Carter Administration, tried to end the crisis in the spring of 1980 with a rescue attempt. That failed with a helicopter crashing in the Iranian desert. Which just made the President look worst and weaker and essentially guaranteeing that the crisis would go on. 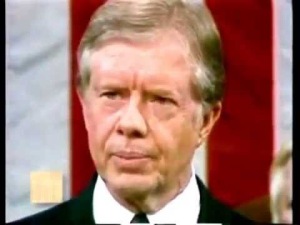