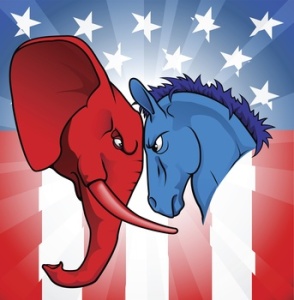 The easiest way to describe where Americans tend to be politically which of course wouldn’t cover all of us. Who are more to the right or left of us would be to describe America as a socially Liberal but economically Conservative country. To sum that up in a more colorful way Americans tend to want big government out of their wallets and bedrooms. Keep taxes down and do not interfere with how we live our lives. Which is why Americans tend to believe in a women’s right to choose and why marijuana and same-sex marriage now have a majority of Americans in favor of it. But we also want our taxes down as well but to believe that Americans tend to be economically Conservative and. Socially Liberal you have to believe that social-Conservatism is about limiting Americans ability to live. Their own lives and certain activities and lifestyles are so unacceptable to a certain percentage of the country. That they must be illegal even if the people doing these things are simply not hurting anyone. And that economic-Liberalism is about high taxes and big government and whole host of social programs designed to help us run our lives for us. If not run our lives in other words the welfare state. But Conservatism and Liberalism are simply not that simple and that’s not an accurate way to describe these two great philosophies.

The facts are both Conservatives and Liberals both believe in economic and personal freedom. They both tend to believe in a high deal of it and both have a healthy skepticism about government. Being involved in our lives and the good that it can do for us. And I’ll give you some examples of that, former Republican Senator and 1964 Presidential-nominee Barry Goldwater is a great example. Of that on the Right and former President Jack Kennedy is a perfect example of that on the Left. Today you go to Senator Rand Paul on the Right and Senate Assistant Majority Leader Dick Durbin on the Left. Rather then Conservatism being about Michelle Bachmann or Rick Santorum on the Right who both have serious big government leaning and proud of them. Even though they wouldn’t describe them as big government views. And someone like former U.S. Dennis Kucinich or NYC Mayor Mike Bloomberg of the Left representing what Liberalism is supposed to be. Even though Representative Kucinich has serious big government leanings on economic-policy and Mayor Bloomberg as serious big government. Leanings on social-issues with all of his bans for our own good and so forth.

This might sound bias coming from a Liberal but I believe America is a center-Left country a Liberal-Democracy. Where both personal and economic freedom are valued and that Americans tend to be more Liberal then they are aware of or want to admit. We do want big government out of our wallets and homes but we also want freedom to work for everybody rather than some people just. Being born to freedom and starting out in life with all of the money that they need. And we want government not to take care of us but to see that everyone has access to a good education and that. Our infrastructure system works for everyone rather than your education again and freedom being tied to who your parents are.

Full-time blogger on a multiple ray of topics and subjects, because of multiple interests.
View all posts by Erik Schneider →
This entry was posted in Politics and tagged American Politics, Conservatism, Conservatives, Liberalism, Liberals. Bookmark the permalink.