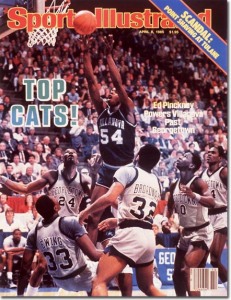 “The one basketball game that John Thompson would probably like to have back. The Georgetown Hoyas wee poised to win back-to-back national championships in 1985 having what clearly looked like the b…”

The one basketball game that John Thompson would probably like to have back. The Georgetown Hoyas wee poised to win back-to-back national championships in 1985 having what clearly looked like the best team in the tournament, with the best player in center Patrick Ewing. Who I at least believe without the leg injuries from the early and mid 1990s I think we’re talking about the best two-way center of his generation. Who was a dominant offensive and defensive force. With his great size, strength and athletic ability. Who accomplished so much in his career with bad knees and never being able to play with another great player. And in many seasons being the only All Star on his team with the New York Knicks.
I’m a Georgetown Hoyas fan even though I’m not as big of a fan as I was when I was growing up and watched a lot of both NBA and college basketball back then. And even though the Hoyas lost this game this season still brings up great memories for me. Because it was a time when the Big East Conference was not only relevant, but it ruled college basketball. It had the same importance as the SEC has for football today. You win the Big East back in the 1980s, or at least do very well and you’re probably a national title contender. Very similar with the ACC of the 1990s and 2000s. The Big East had the Hoyas, but they also had the Villanova Wildcats, but the St. Johns Redman, Syracuse Orangeman and later the Connecticut Huskies and Providence Friars. All very good and top-level basketball programs.

The Big East Conference was like the SEC for college football, what the ACC is fo college basketball today, what the NFC East has traditionally been for the NFL. That one division or conference where if you do well there, you’re having a very good season. You’ve accomplished something very important, because it means you’ve beaten a lot of good teams. It also means that everybody you play in that division or conference will be gunning for you to take you down. Especially if they’re not having a good season. It was a conference again similar to the NFC East where you don’t have a rival, but you have several arch-rivals and it’s just a matter of which of those arch-rivals hates you the most in a sports sense.

I’m not taking anything away from the Villanova Wildcats here. They played a great game and beat a great team that had two of the best players in college basketball in 1985 on them in Pat Ewing and David Wyngate. Who both went on to have good NBA career. Patrick of course being one of the top 5-10 centers of all-time. And the Wildcats are not just still the lowest seed to win the national championship, but they also beat the best team in college basketball that year. And had they played each other for the championship ten times, the Wildcats might not have won another game. But what I’m saying here is that the Big East was so great back then having three teams in the 85 Final Four alone, that you had to very good just to get where the Wildcats got that season. In position to win the national championship.