“The most feared tackler linebacker and the best all time ever!!!”

“Fill in themissing word: Dick Butkus is the————football player in the world.

Nastiest?Fiercest? Smartest? Strongest? Quickest? Angriest? Coolest? Roughest? Thinkabout it for a while—maybe a moment or two. After all, Butkus (left) thinksabout it constantly.

O.K., time’s up.According to those who know him most intimately—and you can count their bruisesto determine the degree of intimacy—Dick Butkus is all of the above and perhapsa bit more. In a sense, he is his own missing word in the act ofself-definition, though some may claim that he is merely the missing link. In agame as complex and specialized as pro football, where experts abound ateverything from placekicking to face-masking, it is impossible to determine a'”best player” in the overall sense. Yet if such a designation could bemade, Butkus would come close to filling it.

Listen to PhilBengtson, the Green Bay coach: “Butkus rates with any linebacker I’ve everseen—Bulldog Turner, Joe Schmidt, Ray Nitschke, George Connor. He has as muchenthusiasm as any player I’ve ever known, and you can always count on him beingsharp.”‘

“Butkus is arguably the toughest and most intimidating player in the history of the NFL.

Going across the middle against Butkus was considered attempted suicide. Butkus’s opponents said that he would bite, punch, kick, spit, claw, and scratch, whatever it took to get to the man with the ball.

He earned Defensive Player of the Year honors in 1969 and 1970 and played in eight Pro Bowls throughout his career.

NFL Films legend Steve Sabol says that Butkus’s career stands as the “most sustained work of devastation ever committed on any field of sport, anywhere, any time.”

Source:Bleacher Report– Dick Butkus: The Monster of the Midway.

“The most feard tackler linebacker and the best all time ever!!!”

Source:NFL Films– Ernie Accorsi is a long time NFL general manager who worked for both the Baltimore Colts and New York Giants.

“Listen to those sound effects. The sound of Butkus hitting people sounds like the thud of distant artillery.” 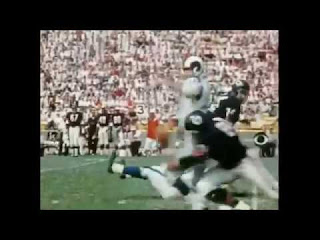 When I think of tough players in the NFL, I think of guys who could and did scare the hell out of their opponents, if not people watching the game as well. I think of guys who not only scared the hell out of their opponents on the football field but on film in practice, putting the fear of God into offenders and offensive coaches and head coaches: “Damn, we are facing this guy this week, how are we going to block him or how many guys are we going to need to block him on any play?”

I can think of a guy who not only hit and tackled his opponents but also hit them so hard that they knew exactly who hit them, because they never felt that kind of pain from anyone else. Offenders were always trying to avoid Dick Butkus, who was a 6’3″, 240 to 245-pound MLB with the Bears from 1965 to 1973 and at his size was playing middle linebacker at a time when everyone else that size was an offensive or defensive lineman. This meant you basically needed an OL to block him, and probably a couple of them.

Butkus was all muscle, and not only huge and strong, but fast as well. He probably ran a 4.4 to 4.5 forty, which is similar to Lawrence Taylor and Ray Lewis, three LB’s who weigh about the same and are all muscle, but Taylor and Lewis played in an era where big LB’s were typical. The closest LB I’ve seen to Butkus’s size, strength, and athletic ability would be Brian Urlacher. I am not saying Urlacher is as good as any of these other LB’s, because he’s not, but he is headed to the Hall of Fame.

Urlacher is a 6’4″, 265-pound MLB, again the size of a DL playing middle linebacker because of his athletic ability and speed. These guys are freaks as athletes, but especially as linebackers, but Dick Butkus was the first freakish LB who was also a great player and is still the best at his position and best LB ever, period.

Some people who are less impressed with Dick Butkus (to put it mildly) make the argument that Butkus only played nine seasons, so his greatness isn’t as impressive because it wasn’t as long. What they fail to realize is that what Butkus accomplished in his nine seasons has been matched by no other, which is why he’s the best. Jim Brown also only played nine seasons but what he accomplished in nine seasons, no other running back has matched: nine-time Pro Bowler, eight rushing titles, and never missed a game as well.

Dick Butkus left the NFL as the all-time leader in fumble recoveries, 30 INT again in nine seasons as a MLB, not a corner or safety. He once sacked the quarterback 20 times in a season, again as a MLB not as a DL, also in a 14-game season. But these are just stats. The way to judge Dick Butkus is the same way you need to judge Jim Brown: what did he bring to to the table and what did offenses have to do to stop him?

Another way to judge Dick Butkus is to look at the position he played: he played MLB, meaning that the offense always knew where he lined up and could always prepare for him. He was predictable in a sense, he wasn’t a rush end like a OLB/DE Hybrid who lined up in several different positions always looking for the best matchup like, let’s say, Lawrence Taylor or Derrick Thomas.

Offenses knew where he was and still couldn’t stop Butkus. Dick Butkus was the best ever at what he did, because he basically couldn’t be stopped. He played the last four seasons of his career on two bad knees, which is why he only played nine seasons, but he was still an eight-time Pro Bowler. Dick Butkus was the most feared and the best LB to ever live.